I watch the mighty mountain at the end of the wilderness. The road that leads there is so long, and I am just a young lass.

“Where is mama,” I had asked papa.
“In heaven.”
“And where is heaven.”
“Beyond the mighty mountain.”

Soon I’m going to be old enough to walk the long road and go beyond the mighty mountain. My mama will be waiting for me in her pretty pink dress, arms wide open, smelling of vanilla and bread. It’s all going to be so beautiful.

I see the picture in my mind’s eye whenever papa comes to my room at night.

In response to Rochelle’s Friday Fictioneers challenge of 8th September based on a photo by Danny Boweman.
It’s a work of fiction that I pray is never true for any little girl, ever.

My caravan travels in search of peace.

I left the city to get away from the commotion.

Now I’m drowning in the noises in my own head.

In response to the Three Line Tales, Week 84 prompt based on a photo by Niv Rozenberg via Unsplash

When am I ever going to let go?
Or more accurately, how do I let myself go?
Earlier this month I took a long overdue break with my girlfriends.
What I did not expect was an almost intervention.

It’s never been easy for me to open up. I’m aloof. A creature that needs a lot of space. But according to them, I have closed myself off even more over the last year. Ever since I lost dad, I guess. Grieving is a process and I’ve been going through that. It’s not been the denial, anger, bargain, depression, acceptance stuff, because after three weeks of watching your hero devoid of movement, speech or though, your beyond anger or bargaining. You go straight to depression. And when you have the added responsibility of running a family and nursing a depressed mum, you barely even have the luxury of depression. You simply add a few layers to that brick wall around you and chug along.

I started blogging when my dad was admitted in hospital. Flash fiction is such a beautiful escape. Plus its so much easier to talk to strangers than the people around you, to have a relationship with someone who you’ll never meet, who wont ask you those intimate questions. No expectations, no judgement, no prodding, and no fear of losing anyone. Just like-minded people casually sharing their souls with one another. A relationship most intimate yet least risky.

In the process I had apparently been staying away from the people who I had chosen as my family. ‘We gave you time, now snap out of it,’ is the ultimatum that has been delivered to me.

These are tenacious women. I better knock down a few bricks or someone is going to be huffing and puffing till they break the house down. I love them. With all my heart. But I still need to figure out how to let myself go.

In response to the Stream of Consciousness Saturday prompt ‘When’

I look at the nice colourful pens in their fancy stand, displayed for all to see. Flashy things add to the aesthetic appeal.

Then there are pins.

Pins are cheap boring and functional. No one looks at pins except to use them. Great stress busters too. You can bend them into any shape you like, twist them any which way, shove them into a cheap disposable cup like the cheap disposable things that they are, and toss them out whenever you feel like cleaning house.

I look at the termination letter in my hand. Yup, I’m a pin.

In response to Rochelle’s Friday Fictioneers prompt of 7th July 2017, based on a photo by Claire Sheldon

I sit here on the toilet seat, stick in hand, waiting for the verdict.

The twinkling of street decorations and the chatter of little children float in through the window. Halloween, the day all the kiddies go trick or treating, and I wonder, is fate going to treat me or will I be tricked once again.

There was a time when I would be doing this with Max by my side, clinging on to each other, hoping, praying, excited, fearful. Mum would be on her knees in prayer pleading and bribing, while dad hovers aimlessly by the telephone.
But now Max is watching telly and mum is out with her five grandchildren. Yes five! It appears that everybody in my family is fertile but me.

I know that they have not stopped caring. I see them tiptoe around me and cringe every time I lash out at them. It’s not their fault. But it’s not mine either. I’m tired. I’m tired of trying again and again and again. It’s like with every iteration something inside me dies. I think that something is hope.

Now, my heart is just as dry and barren as my body.

Does life grow on dry barren land, does a dead tree bear fruit?

I look at the stick for answers.

That all my worldly possessions fit into the trunk of a car should mean something. But it doesn’t.

Not much means anything any more.

The tears of the sky fall upon my wind-shield and the wipers brush them away with nonchalance, a nonchalance that has now settled deep within my mind.

For forty years I worked as an accountant, bent over a desk in a 4 by 4 cubicle, returning to a house ransacked by two hyper active kids, who I love most dearly. What got me through was the mantra – ‘when they are off to college, I’ll be off to live my life.‘

So here I am. I’ve settled my affairs, cashed in my chips, and am off to live my life, or at least what is left of it. With stage three carcinoma, the doctors really couldn’t say.

Samuel put down his tools and looked around at the potting shed. His wife had been after him to fix it but he could never spare the time, or if truth be told, he had never made the time. When he had finally stepped into the dilapidated shed he well understood the reason for her consternation.

It took a while, but he had done it – woodwork fixed, table polished and everything cleaned. She would be pleased with her shed now.

Carefully he rested her urn on the table, exactly where the first rays of the sun could caress her. Somehow he knew she would be happier here than on any mantle place.

Observing these statues is almost like beholding my own reflection. Beautiful objects on display that evokes awe in others but are themselves cold and dead.

There was once a young girl with beauty in her visage, dreams in her eyes and hope in her heart. A handsome prince arrived on his ivory steed, saw the exquisite girl flanked by her generous parents and immediately fell in love with her. “You are so beautiful,” he confessed, “that I cannot bear another looking upon you!” and with these words of love he locked her away in his castle. She spent her days waiting for him to return from his many tasks of great importance and her nights taking care of his many needs. When there were parties or when the generous parents visited, he dressed the girl in finery so all who saw her could marvel. How fortunate to have beauty, riches and a doting husband who takes her on exotic holidays around the world!

I wonder perhaps if someday my heart will grow so hard that I too would turn to stone. They could place me in some corner where naïve young girls will toss a coin in my direction while wishing for beauty or a good husband; and my cold unfeeling heart might whisper, “take my beauty; give me your hope.” 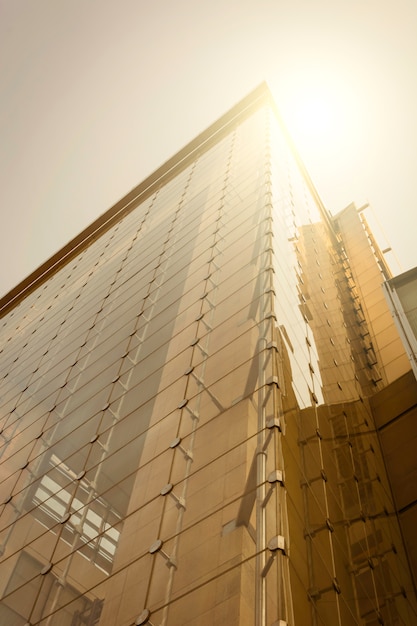 As he waited for the walk sign to turn green, a sudden glow of orange caught his eye. Sunlight reflected off of the glass façade of one of the many skyscrapers. In his youth buildings were made of brick and wood and the sun set behind them, but all these modern buildings of glass and steel, it was almost as if the sun was going to sear through their windows and rest within. He was raised a practical man, and never could understand why one would opt for all that fragile glass. Glass barely kept the sunlight out and it shattered so easily in the cyclone!

Slowly as the orange glow subsided and the interior lights grew brighter, he started making out the forms of the people inside. Men and women bent over their desk, hard at work. Men and women, moving about with rapid strides, rushing to complete tasks before the day is done. Men and women, chasing after success and wealth.

Who awaited them at home he wondered. Little children who ran up to the door when daddy got home? Teenagers sitting oblivious behind shut doors? He watched them until the lights started going out one by one. It was getting cold. He had meant to go to the store but suddenly he could not recall what he had set out to buy. God, this was happening way too often.

It’s all right, it would come back to him soon. It usually did.

Many thanks to Neil MacDonald for posting a very interesting Scrivener’s Forge exercise in character and world building – A man whose son has died in the war is looking at a building. Describe the building without mentioning the war, the son, or his death.

As the innocents are slaughtered, their blood spills over to stain skies.

Yet a new dawn awakens, with a trial for mankind.

When the floods overfloweth, will the Gods awaken then?